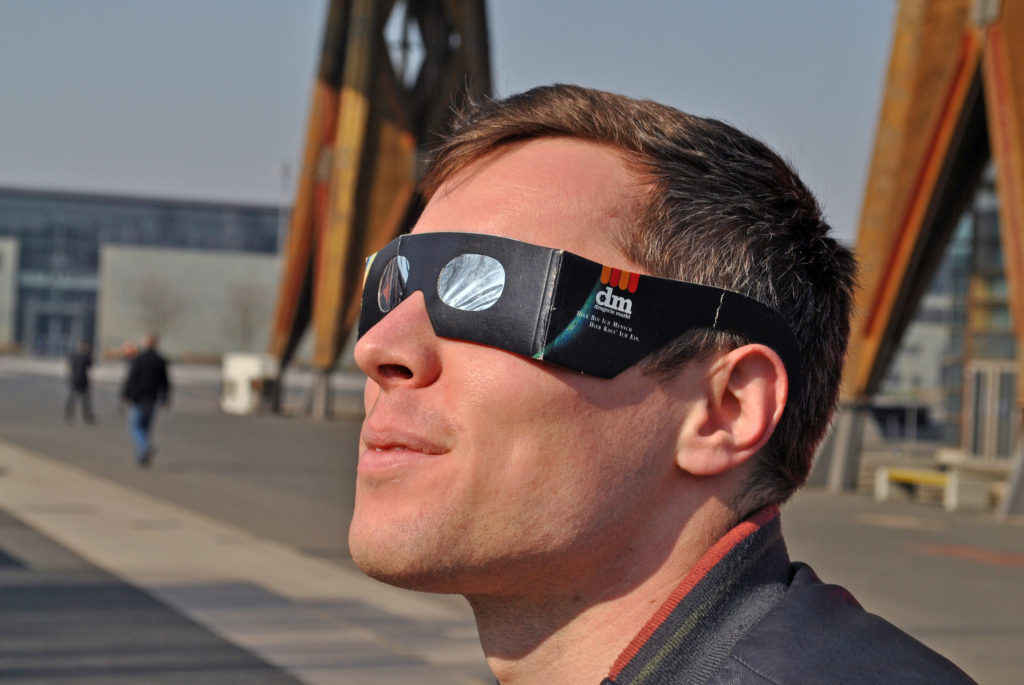 A partial solar eclipse is not rare, but on Monday August 21, 2017, the moon will pass directly between the earth and the sun creating a total solar eclipse.  Day will turn into night for a brief and rare occurrence.

What is a Solar Eclipse?

When the moon orbits the earth, it moves between the sun and the earth.  A solar eclipse happens every 18 months, they last for a few minutes.  During an eclipse, the moon casts a shadow onto earth, there are three types of solar eclipses that could possibly happen.

When the sun, moon and earth are in a direct line, the sky becomes very dark, as if it were night.  A total solar eclipse is only visible from a small area on Earth.

The upcoming August total eclipse will have a path exclusively over the US for the first time since 1776, earning it the title “The Great American Eclipse”.  The viewing zone is a narrow path from Oregon to South Carolina.  In Southern California, we will still be able to witness a partial eclipse.

This is quite common and occurs when the sun, moon and earth are not perfectly lined up, the sun will have a dark shadow on a small area of its surface.

This occurs when the moon is the farthest from the earth.  The moon seems smaller and it does not block the entire view of the sun.  The moon will look like it has a bright disk around it.

Eye Health Warning During the Eclipse, What You Need to Know!

It is never safe to look directly at sunlight, during a total solar eclipse the sun is blocked, but even looking directly at the smallest part of a partial eclipse can cause serious and permanent eye damage.

We’re always eager to document such an event, but it’s important you don’t look directly at the eclipse through a camera, pair of binoculars even if you’re wearing sunglasses.  There are eclipse viewing glasses specifically designed to protect your eye health.

Why is an eclipse more dangerous than a normal sunny day?

During an eclipse, the sun is hidden by the moon and suddenly appears, our pupils dilate to let in more light during the fast switch from dark to light, this allows more bright light to reach our sensitive retina.

Children are especially at risk, their lenses are clear which allows more bright light, and they are generally more eager to stare.

Alexandra Chebil M.D. also urges everyone to avoid taking a selfie during the solar eclipse.

“Taking pictures of the solar eclipse on a Smartphone could put people at risk of blindness. The camera lens will not protect your eyes like the eclipse glasses.” She said in her recent article to Lido Living Magazine, an Orange County publication.

Regardless of these warnings, a solar eclipse is a wonderful event that should not to be missed.  By taking precautions, you can enjoy the visual wonders and still care for your eye health.

The eclipse duration will be a few minutes but worth every second.  If you’re planning to enjoy the total eclipse coming up in August, you may want to make travel plans to Oregon, Idaho, Nebraska, Missouri or Wyoming.

To view the partial eclipse in Orange County CA on August 21, 2017, grab a pair of eclipse glasses and travel inland for clear skies and a better view.

If you have any questions or would like to contact Alexandra Chebil M.D. with questions relating to this or any other eye health issue, feel free to give us a call or schedule a complimentary consultation.